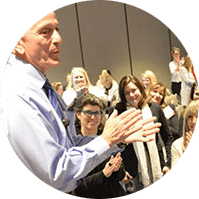 Because how you show up matters

Think of executive presence as how we show up in relationship with others. Our practice of developing executive presence can grow if we think about it as layers of experience.
As we start to develop and expand our presence, we begin to notice the impact that it has on others. When we put our attention to this impact, we learn to expand into the experience of others (empathy). Our growth as a leader and effective communicator arises out of this awareness.

The best storytellers make it look easy. As a listener we are immediately pulled in by the glint in their eyes, the cadence and variety in their voice, and the expression on their face. It’s like they are telling the story with their whole body. We are particularly captured by how they make us feel.

Great storytellers are willing to open themselves up and allow us to be in the story with them. We feel what they feel. We see what they see. And, most of all, we gain the realization and insight from the experience that they have had. Their story is our story. 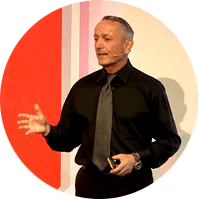 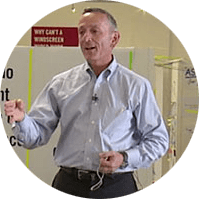 What makes the process work?

We use a range of experiential learning techniques drawn from the fields of theatre, performance, visual, martial and meditative arts. These serve as a foundation for creating customized learning experiences that allow participants to increase self-awareness, build skill and mastery, and make transformational shifts in daily leadership behaviors. Often times it is the subtlest change in someone’s physical or vocal presence that makes the biggest difference.

What makes the process fun?

We help leaders become great communicators by first creating a safe and failure-free learning environment. We provide specific and actionable coaching within well-constructed exercises that encourages breakthrough results. And we laugh a lot!

Driven by a passion to coach business leaders to develop their presence, tell compelling stories, and establish authentic connections, Rob Salafia combines two decades of experience as a top leadership development executive with a stellar past career in the performing arts. In his current professional role, he assists leaders in their quests to build sharper levels of emotional and narrative intelligence, transition into higher organizational levels, and share their visions and strategies in compelling and relevant ways.

For the first half of his career Rob was a performing artist where he traveled the globe delivering his unique, one-person variety show. He was first captivated with the art of storytelling in 1977 when he attended The National Association for the Preservation and Perpetuation of Storytelling Conference in Jonesboro, TN. He studied the art of tap dance with Gregory Hines and many other tap dance legends; and in 1989 was awarded a residency with the renowned dancer, Honi Coles. When cast as the lead in a Boston-based musical, Rob was asked by the director to learn wire walking for the show. Always a quick study, he went to task and within 2 months made the art form a part of his repertoire. At the heart of Rob’s approach to performance was the relationship he built with his audience. He projected a sense of warmth, confidence and light-heartedness that permeates his work to this day.

As an executive coach, Rob finds great satisfaction in guiding leaders through transitions to more senior roles, as well as coaching senior executives and leadership teams in preparation for strategic presentations.

He holds an MS in Organizational Policy from Boston University and a Graduate Certificate in Executive Coaching from William James College.

“Rob’s sessions are extremely powerful in building the right mindset, creating trust and developing leaders to be more effective and inspiring communicators.”
Alex Klein, Sr. Director, Talent & Organizational Effectiveness, Lumileds
“Rob is a well-grounded and well-rounded coach. He taught me the power of story-telling. It has meant a great deal in my development as a leader. He is able to select the right combination of exercises for the right time.”
Peter Penning, IT Manager, ING Bank
“Rob makes leaders shine. I engaged Rob to help coach and train two performing CEO’s in facilitation and speech delivery. Rob used a conversational and casual coaching style which helped disarm the mechanical/processed sequencing often associated in these trainings.”
Timothy Wong, Sr. Manager, YPO
“Rob provided a safe space and optimal learning opportunity for us to increase our individual communication capabilities, as well as enhance the relational fabric of our team. The word spread fast in our office and he has been asked to deliver another session for a colleague and her team.”
Monica Vorn Mijaleski, SVP News Corp
“Rob is great to work with…he really cares about listening to your requirements, bringing that brief to life and delivering on it. He’s always curious, engaged, motivated, highly flexible and reliable and delivers what he says he will!”
Laura Ellis, Director of Global Talent – Sony Music Entertainment
“When I watch Rob working with senior leaders there are a couple of words that come to mind: passion, authenticity, helping others to transform, compelling and engaging. Last but not least a pleasure to work with!”
Ewa Wisniewska, Head of Culture and Organizational Development
Previous
Next

A few of our delighted Clientele