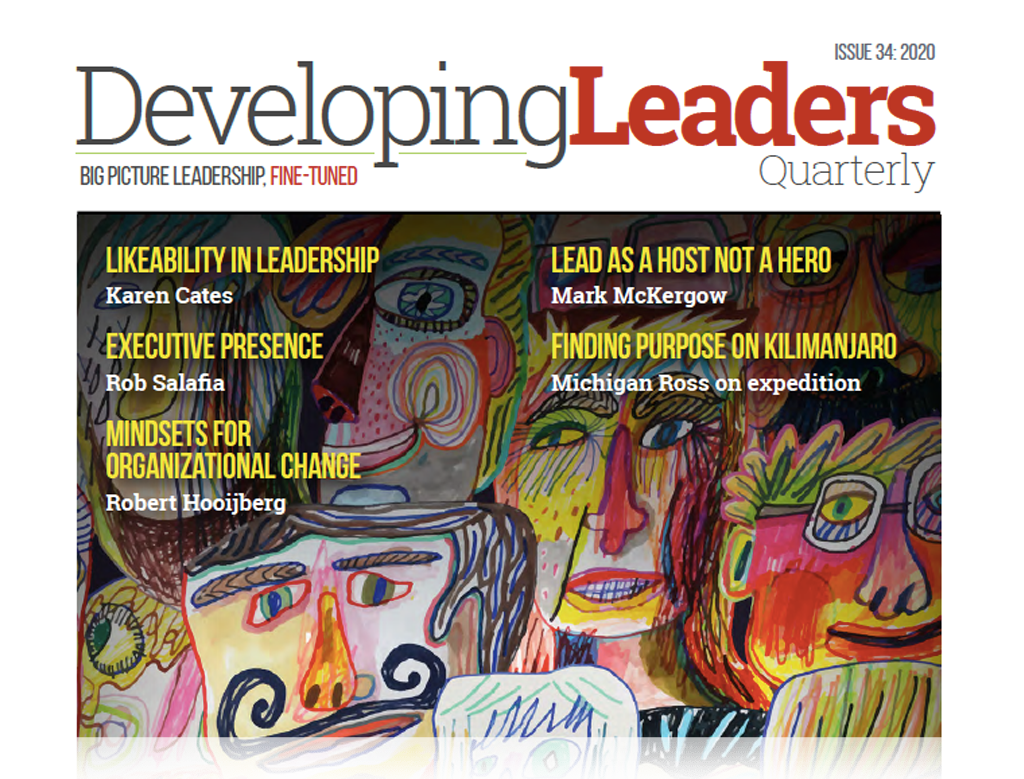 Still Don’t Know What Executive Presence Means? We Have You Covered.

Executive presence is an element of leadership that is easy to recognize but difficult to develop. In fact, in a recent study by the Center for Talent Innovation, it was found that feedback on executive presence is often contradictory and confusing, and that 81% of those who are instructed to improve their executive
presence are unclear on how to act on it.

Communicating Through the Cracks 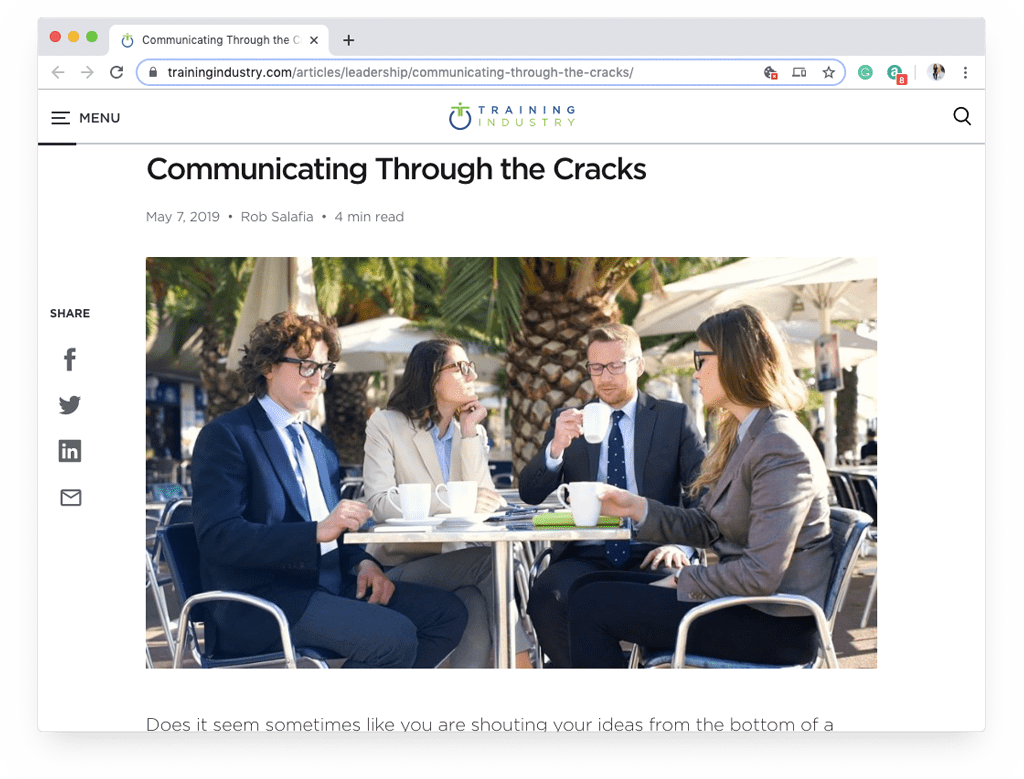 Does it seem sometimes like you are shouting your ideas from the bottom of a well, and no one is listening or even cares? Are you afraid to offer an alternate opinion or point of view because of the fear of being demeaned or ostracized? Do you find the voice in your head saying, “I […]

The Art of Building Resilience 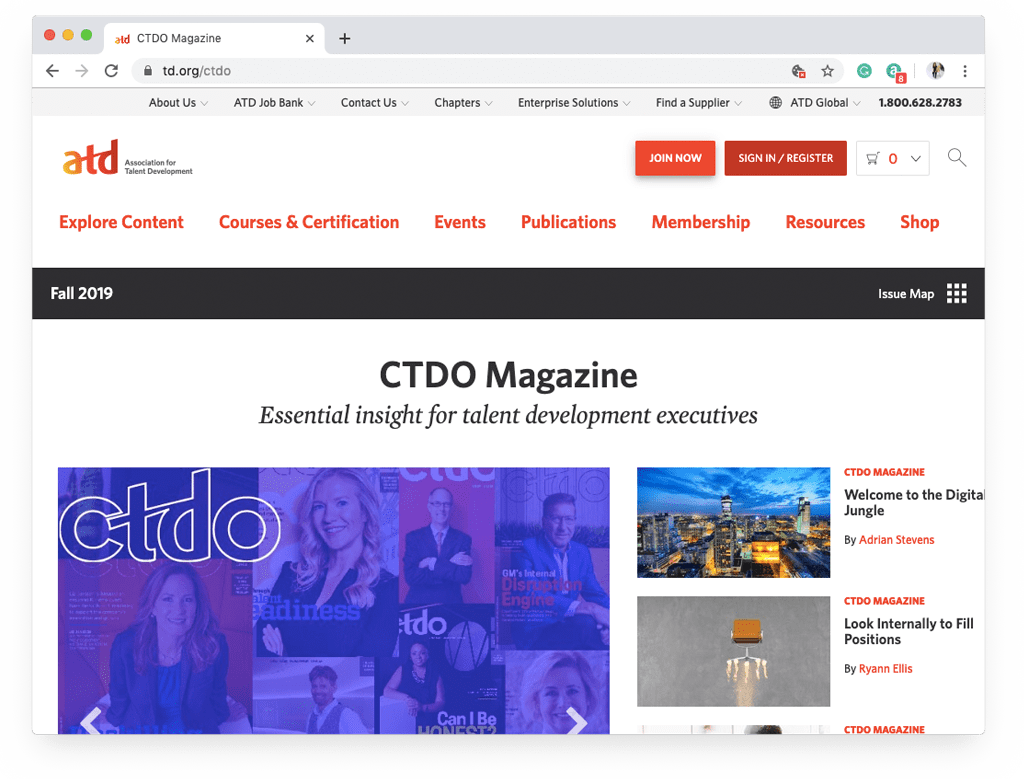 Don’t assume your employees know how to process failure on their own. Resilience and adaptability are critical skills for leading change A Japanese proverb says, “Fall down seven times, stand up eight.” But resilience is a learned art. As a senior leader, you have the power to help aspiring leaders get there. One task of […]

How “The Actor’s Secret” Can Help You Improve your Presentations 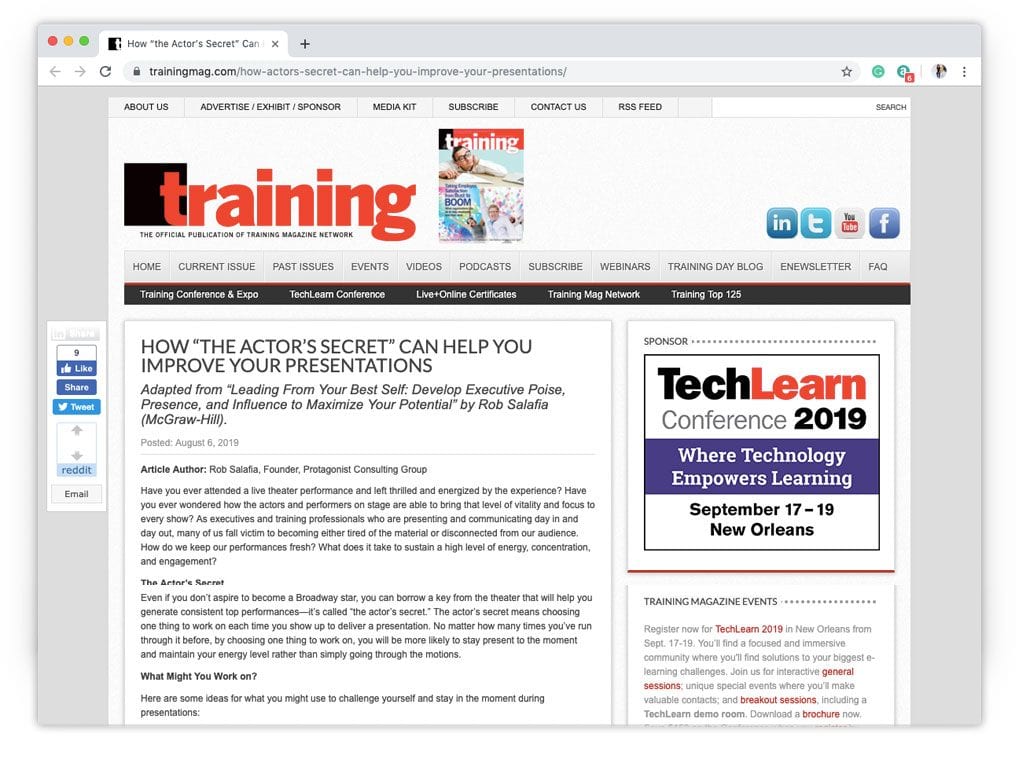 Have you ever attended a live theater performance and left thrilled and energized by the experience? Have you ever wondered how the actors and performers on stage are able to bring that level of vitality and focus to every show? As executives and training professionals who are presenting and communicating day in and day out, […]

Make a choice to switch to a positive feeling 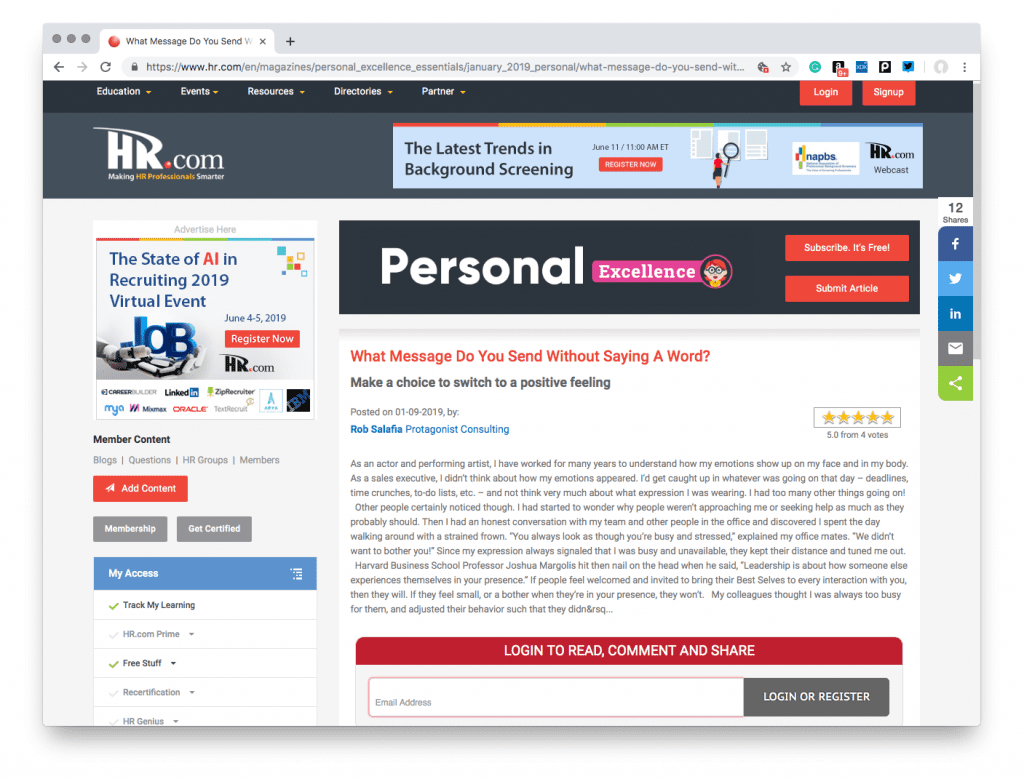 As an actor and performing artist, I have worked for many years to understand how my emotions show up on my face and in my body. As a sales executive, I didn’t think about how my emotions appeared. I’d get caught up in whatever was going on that day – deadlines, time crunches, to-do lists, […]

Most Hated to Most Admired: Tips on Transforming as a Leader 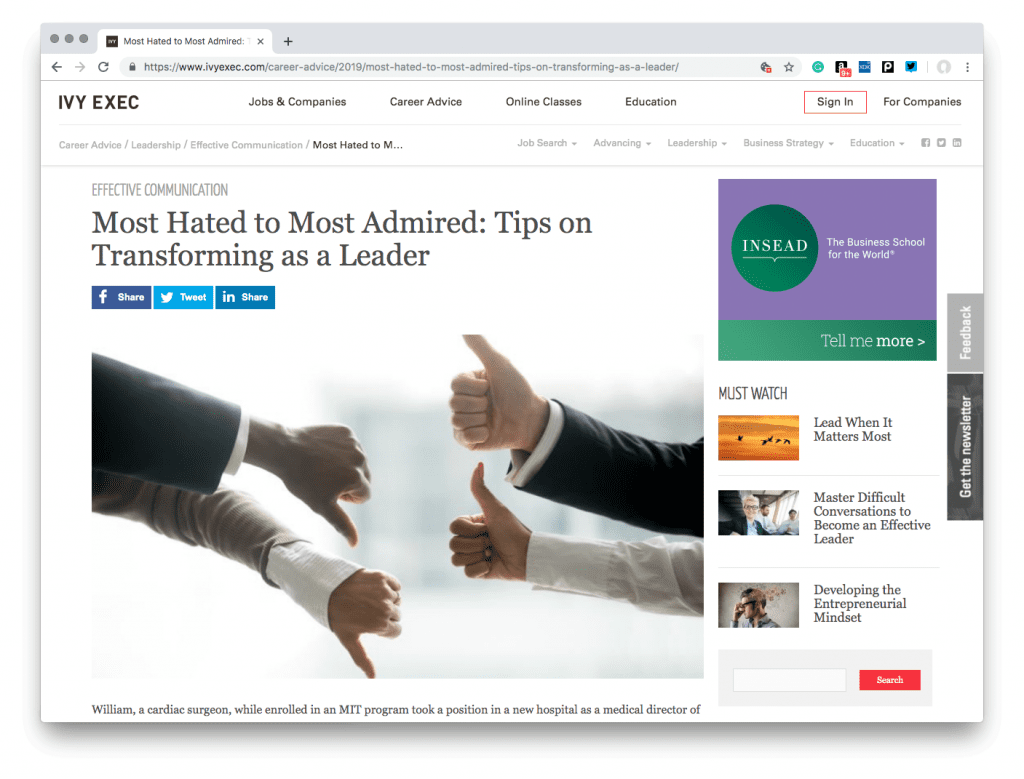 William, a cardiac surgeon, while enrolled in an MIT program took a position in a new hospital as a medical director of a department. This meant he would need to split his time between the operating room (OR) and overseeing the activities on the floor. This was something he had been considering for some time. […] 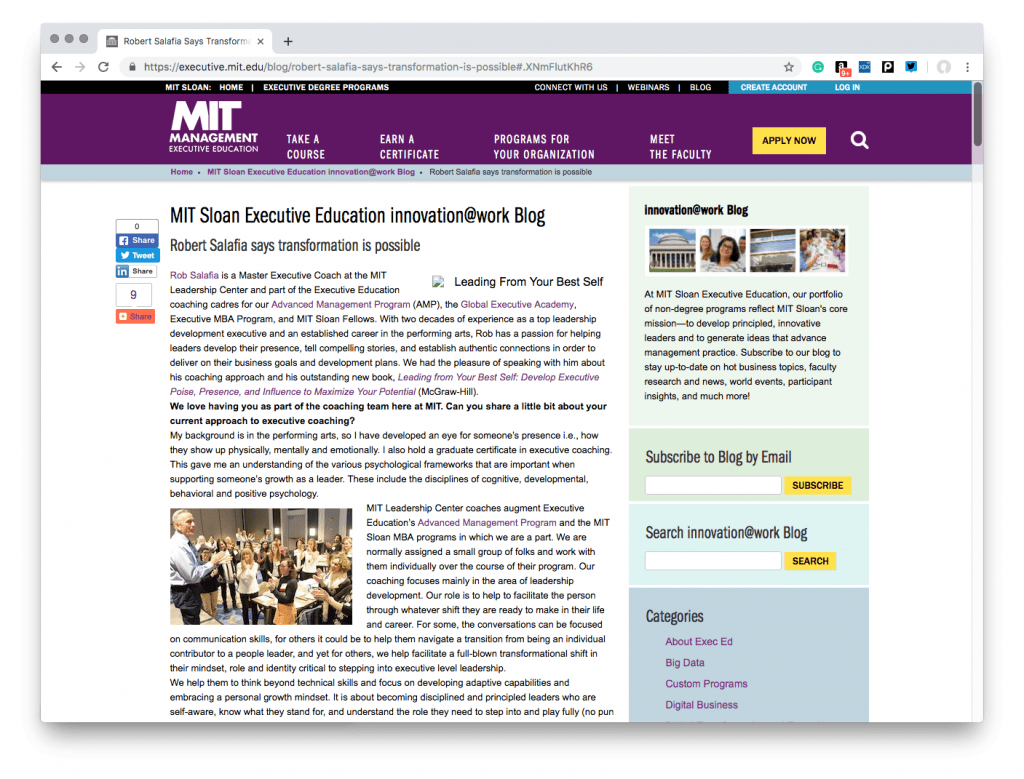 Robert Salafia says transformation is possible Rob Salafia is a Master Executive Coach at the MIT Leadership Center and part of the Executive Education coaching cadres for our Advanced Management Program (AMP), the Global Executive Academy, Executive MBA Program, and MIT Sloan Fellows. With two decades of experience as a top leadership development executive and an established career in […]

In a new book, Rob Salafia ’76 shares skills developed on the stage  By Jim Keogh When he performed on the streets of Boston, Rob Salafia ’76 was learning how to establish his presence in front of an audience. When he walked across a wire onstage, he was navigating through his fear and finding his […] 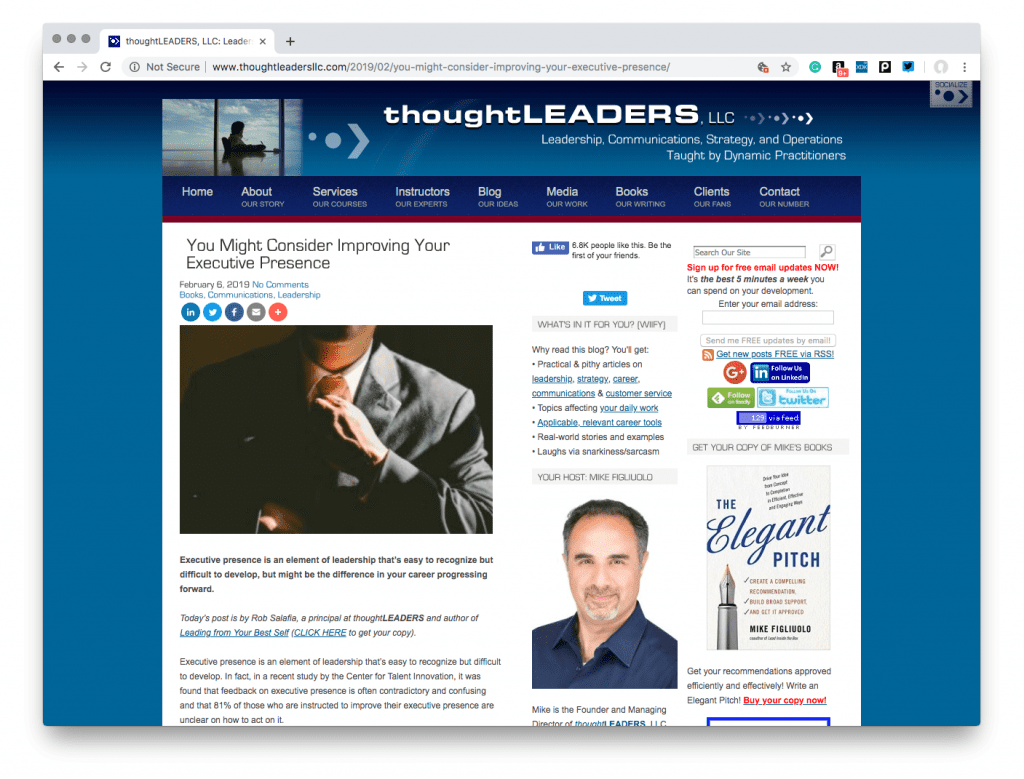 How To Master Transitions By Pressing The Reset Button 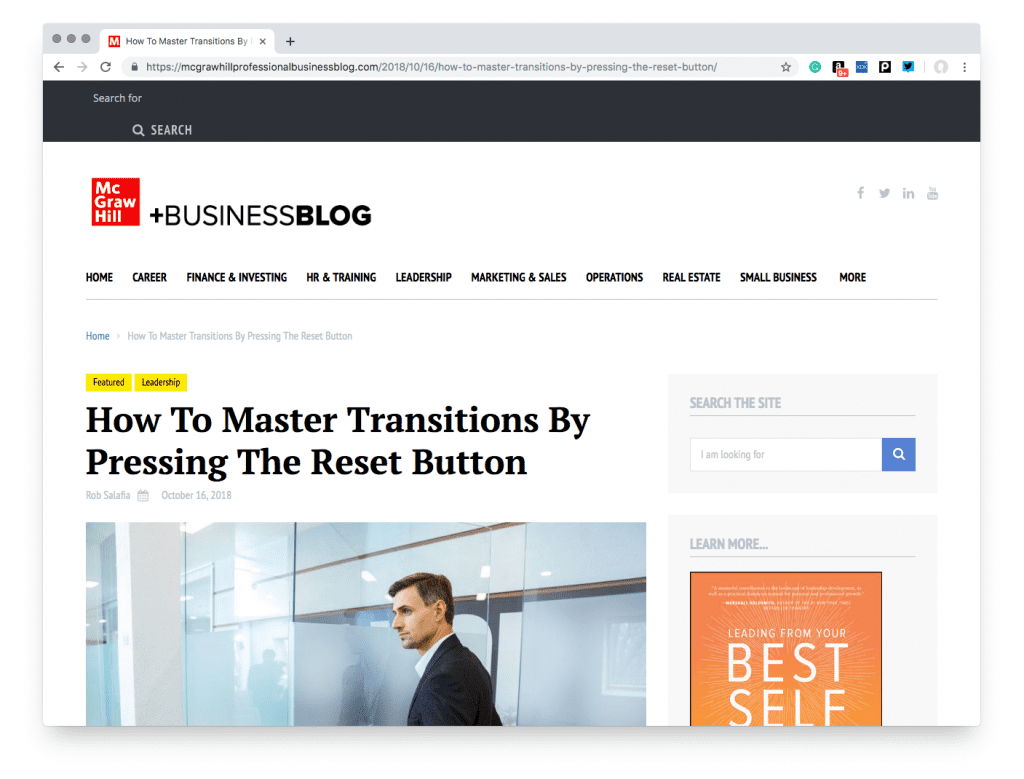 Rob Salafia, an expert on executive presence, explains how to master transitions and become a more effective leader by mentally resetting. “We do on stage things that are supposed to happen off. Which is a kind of integrity, if you look on every exit as being an entrance somewhere else.” — Tom Stoppard One of the […]

A few of our delighted Clientele